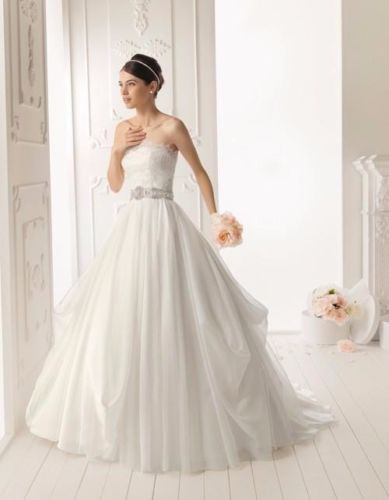 This gorgeous Rosa Clara wedding dress has been tried on several times and altered but never actually worn! I bought this one as I couldn't find the style I wanted, got it altered, and then found the the one I originally wanted so bought that instead. Yes, I am now very broke!!

I bought this dress for £700 from the USA and then had to pay £100 + customs charges to get it shipped over, so it's a total bargain. It's a little grubby from being handled, which you'll see from the photos, but essentially it's brand new. It's been stored in its original Rosa Clara bag in a smoke and pet-free home.

Please let me know if you have any questions and I'll be happy to answer them. I'm also selling the Rosa Clara gown I actually wore, so if it's the designer you like, do have a look!

I had it taken up so it sits just above the floor with a petticoat underneath (which I sold separately, but can be bought quite cheaply) and wearing 2.5 inch heels. I'm 5ft 3". I also had the buttons moved across slightly to make it a bit tighter on the waist, so if you look closely you'll see they aren't in a dead straight line, though I don't think it notices once it's on. I've taken a photo of this also. 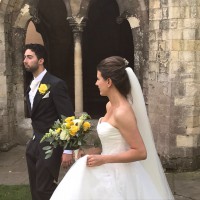 Visit our help center or join the conversation on the forum

Once you send a message, Debs can invite you to purchase the dress.